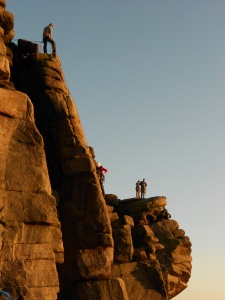 e Peak District for their annual Freshers’ Trip. 65 members, new and old, pitched tents and unpacked crates for a weekend of rain, climbing, and a fair amount of pub-invading.

The first day was wet and cold, so many headed to indoor centres whilst a brave few (myself among them) tackled the gritstone before succumbing to the draw of dry walls and 50p cups of tea.

Packing almost 70 people into a small local pub is no mean feat, but this was achieved for a night of food, good conversation, and surprise sparklers organised by our trip master ‘Novelty Matt’. A rather unusual USMC tradition, we new folk discovered, is the ‘naked’ photo in which all top clothing (bar undergarments) are removed regardless of temperature for an enthusiastic if somewhat embarrassing photograph. Needless to say after a few hours in the pub we were willing victims and drew quite a crowd of locals.

After another damp night in tents, we awoke to glorious sunshine on Sunday, and all headed off to various crags around the area for a full day of climbing in unexpectedly mild November weather. The club predominantly focuses on trad climbing (placing your own protection rather than relying on pre-set bolts) – this was my first experience of this form of climbing, and despite the admittedly large amounts of ‘faff’ involved, it was nevertheless an interesting time and something I hope to develop in the future.

Four minibuses of people plus several cars eventually began the 5hour journey back to campus after an incredibly successful trip. Plans for the next three are already underway and I have no doubt this will be the first of many documents of our eccentric expeditions.