The weekend of the 3rd-4th March was the Mountaineering Club’s Annual Dinner, held in the beautiful (if a little soggy) Peak District. After a night of camping in Chesterfield in which tents were shared and many a pint had at the local pub, the club awoke to classic Sheffield rain. However, undeterred many ventured to The Climbing Works – an indoor bouldering centre, others headed to the climbers’ comfort of the tearoom, and one adventurous carload managed to get in some outdoor climbs on Burbage North, enjoying a few hours of rare, tentative sunshine that gave some great views and dry rock.

Relocating to the fantastic 4-Star DoubleTree by Hilton Hotel, we were treated to saunas, Jacuzzis, swimming, and luxury bedrooms – a change from the tents and bunkers that we are so fond of. It proved a welcome reward half way through the year, and was a way for old members to come back and catch up after years of participation with this crazy, sociable, adrenaline-fuelled society.

As is tradition of the club, Secretary Kilian Collender arrived sporting a rather fetching, one-shoulder dress, complete with tights and black plimsolls, and was undoubtedly the belle of the ball. Other customary activities included the infamous ‘Total Immersion’ in which all desserts are consumed without cutlery in a three-round race – the bemused waiters dutifully removed all forks and spoons whilst tuxedo-clad climbers stuck their faces into profiteroles and lemon meringue. The Chairman’s Pint (which was also given to those whose birthdays were soon) was finished in good time by current chairman David ‘Windle’ Comer, and the dancing commenced in full force. Amidst the dubious moves and over-zealous singing, we were given the pleasure of a special performance by Mikey ‘Spoons’ Barton, our resident spoon-player and all round musical prodigy.

It was definitely a weekend not to be missed – the group of 60 members, past and present, all looked fabulous in attire a little more upper-class than our usual chalk covered t-shirts, and even those who spent the evening getting cosy with the toilets left on Sunday with a big grin and some rather interesting (if patchy) memories. We were given a beautiful Saturday, a lot of laughter, and on Sunday awoke to Sheffield snow, convincing all to head to pubs and cafés for yet more tea and plenty of stories.

The USMC has it all – extreme sports, great people, a fondness for parties, and the result is a year full of bizarre and memorable trips. Make sure you don’t miss out next year… 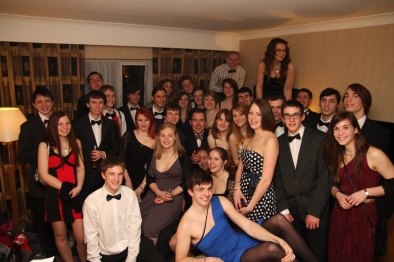 This article will be printed in Issue 44 of The Stag, to be released 20th March 2012.
Image belongs to Simon Cox.